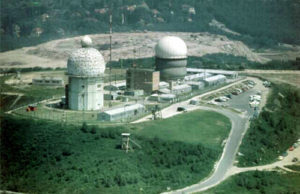 Photo of Teufelsberg as it was in 1969 in Berlin, Germany where I worked for the United States Army Security Agency a division of NSA. This was taken before the site was expanded and upgraded to the computer digital age. The domes were filled with a variety of powerful antennas all linked to sophisticated receiving and recording equipment in the rooms below. I started working there below the gray/white dome on the right as a voice intercept operator and later as a search operator and eventually became the trick chief of “C” trick (army lingo for shift). The site was manned 24 hours a day by 4 rotating shifts (tricks) of linguists, technicians, administrative officers and other specialists in addition to a permanent straight days shift of mostly married personnel. The dome on the left with the ball on top belonged to a British military security outfit that was a division of MI6. We rarely interacted with the Brits on site but off site were a fun bunch to associate with.
.
I eventually graduated to the second floor of the 3 story brick building between the two domes where I transcribed taped voice intercepts from German to English. The transcribed tapes were sent to the 3rd floor above where the NSA civilian traffic analysts worked wtih them. I was told that there were CIA folks on the third floor also. There was a phone system that could directly communicate with the White House. An electrified double-fence encircled the site with armed guards with dogs walking the fence perimeter and out into the surrounding woods.

Two times during my tour I was tagged for courier duty which entailed transporting sensitive documents generated from this site and another nearby smaller listening site in Berlin. Myself and another courier carried the material through the night on a passenger train through East Germany and delivered them to the Security Agency’s headquarters in Frankfurt, West Germany the next morning. The duty assignment was always for one round trip a week for four weeks to and from Frankfurt and always with someone different so as not to create a noticeable pattern of traffic. It was good duty as there was a lot of time off between trips and were not obliged to do any other duties. Most times we carried nothing back to Berlin except our personal overnight bags. The train was regularly stopped multiple times to and from Berlin during the night while in East German territory by armed East German guards who checked I.D’s and made a head count. They never gave us any trouble but were intimidating with their weapons and their serious demeanor.

This is all unclassified now. A sign on the now defunct site actually states that it was a cold war American listening station but up until the late 1980’s it was one of the NSA’s largest highly top secret installations in the world. All during the cold war Berlin was a hot bed of active spying and espionage operations largely due to its geographic location deep within the borders of communist East Germany with access to Western Europe. The site and it’s operations were actually compromised in the late 80’s, long after I left, by a Russian-trained East German agent in collusion with an American warrant officer. The cat was out of the bag then. The agent and his American accomplices were caught and imprisoned in the United States. The station was gutted and abandoned in 1991.